The World Quality Report for 2015-2016, presented by Capgemini, HP, and Sogeti chronicles the state of quality assurance for 1,560 executives across 32 countries, giving us a picture of the trends happening in QA, and for us, a glimpse of what we can expect in mobile testing.

Here are our five takeaways:

“Digital Transformation puts customer value and end-user experience at the heart of digital initiatives. Get it wrong and the company’s reputation will suffer. . . Thus, the ranking of protecting the corporate image as the top QA and Testing strategic priority is wholly understandable.” 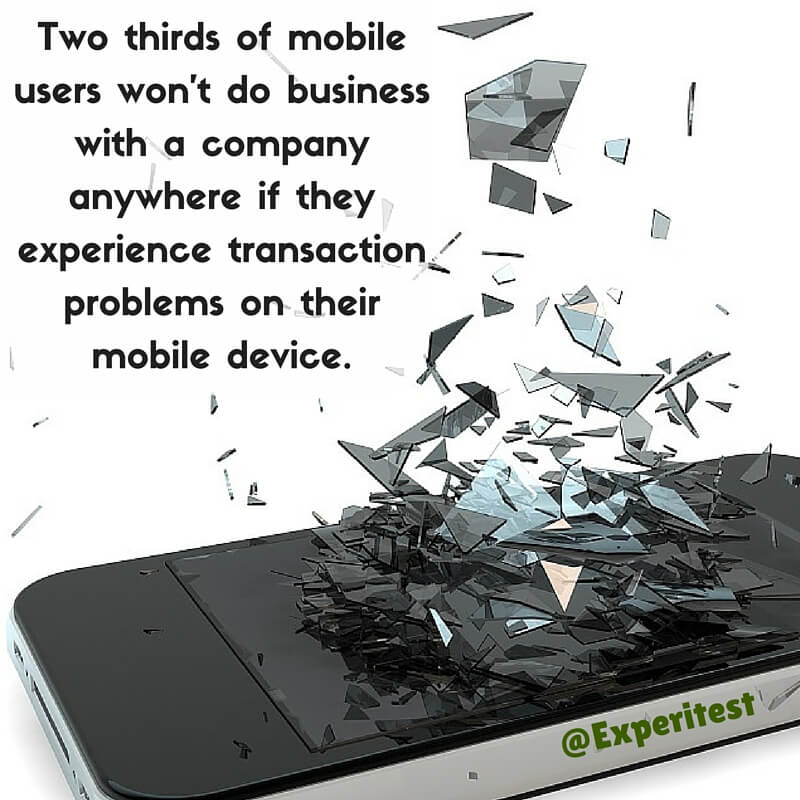 This thanksgiving holiday shopping season saw 26% of all online sales conducted on a mobile device. Where physical shops like Macy’s and Walmart saw a drop in Black Friday sales of over 30%, Amazon, the online retailer saw a rise of over 115%! People are interacting with a business over its mobile app more than any other channel. This makes your mobile application quality assurance strategy critically important.

45% of all test cases are automated. For the last year, there was an alarming 9% rise in mobile QA testing budgets. That means people are still performing manual testing for their apps. While a business can secure some cutting edge manual testing tools for free, like Experitest’s SeeTest Manual, mobile test automation tools are a must at a time when test coverage is expanding exponentially.

The average mobile application has to be tested on 4 different operating systems, and several versions of each. It also must work on 20,000 different types of mobile devices, and 400 local phone networks all with varied levels of latency and throughput. This implies a test coverage of over 50 million ways a user can use your mobile application. 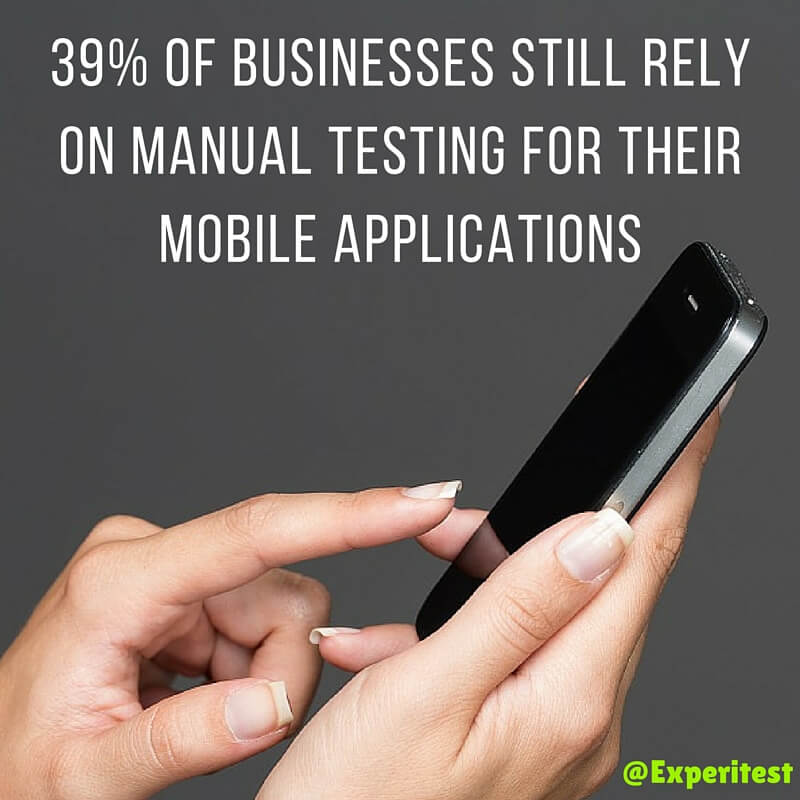 Mobile test automation benefits you in the following ways:

SeeTestAutomation, and SeeTestCloud are test automation tools for mobile apps that meet all of these requirements, letting you migrate into automated testing with the greatest of ease. 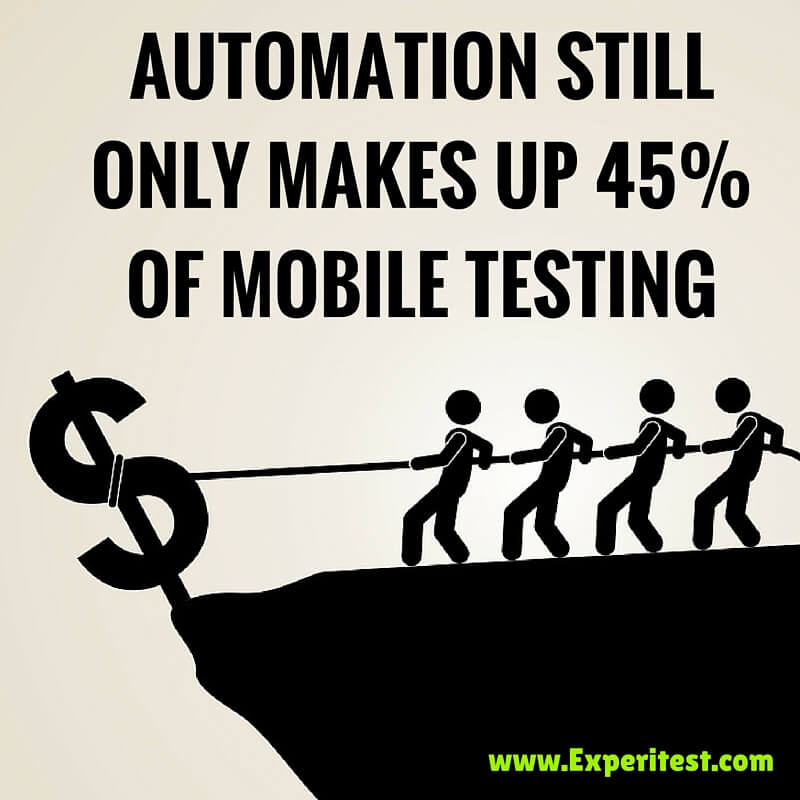 3. Technology is Still Ahead of Business

Despite all of the talk about the DevOps revolution, it has still not become mainstream. The best companies are in the early stages of transforming their IT ops to a mobile first attitude. By and large, the bulk of the industry has not fully implemented DevOps, nor has it invested in the required resources to do so.

This presents great opportunities for most businesses. If we know that over a quarter of companies don’t test at all, and 39% of apps are tested manually, then by simply implementing test automation for your mobile applications, you will reach higher mobile quality than over 2/3rds of your competitors. 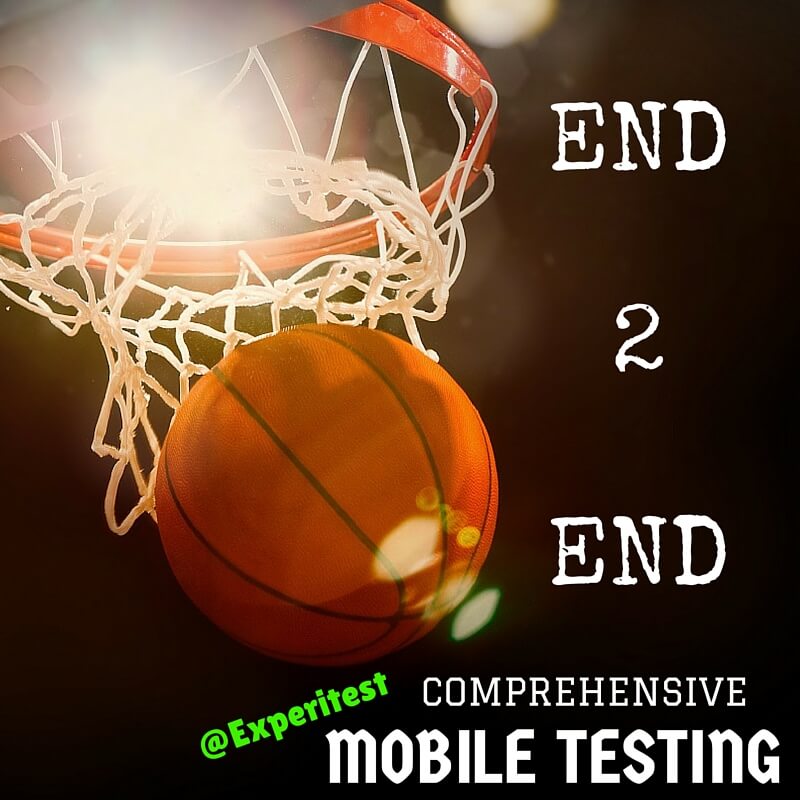 Until every company is internally structured for a mobile first, digital first strategy, those businesses that act now will enjoy a competitive advantage over those that don’t.

4. Agile and DevOps Adoption Raises the Need for Mobile Testing

While DevOps is still in its initial phases, businesses are waking up to the fact that the old model of releasing software at specific times is being replaced with continuously improving applications that constantly have to keep up with new innovations appearing on any of the platforms these applications run on (like mobile operating systems, mobile devices, network connection speeds, etc.).

According to the report, the top three challenges large enterprises face are:

Mobility as a whole is still less than a decade old. Experience still has a low ceiling.

Still, there are tactics an emerging DevOps team can employ to move up the learning curve faster. It all boils down to one strategy: 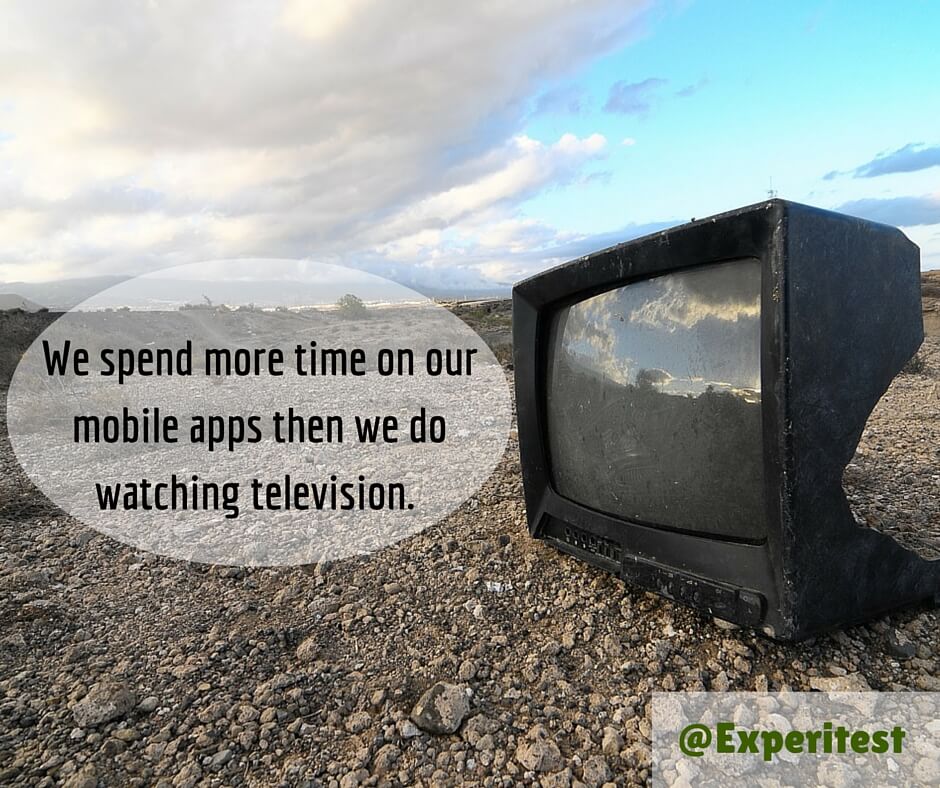 The first challenge, identifying the right areas on which mobile testing should focus, results in too narrow an approach to testing. A mobile testing team can successfully test every function of their mobile application to perfection, only to see it abandoned by the public due to problems it didn’t test for.

A common challenge is when your mobile testing lab uses state of the art technology to connect the mobile application to the application server, and every function is performed at a connection speed far greater than what 99% of your users will have access to. With the ideal environment simulated in the lab, the application is far more likely to pass all the tests. The mobile application is released, only to perform too slowly for the user’s standards. A page that functions perfectly may take 1 second to appear in the lab, but 10 seconds for a user on your app while riding an elevator. If the function performs too slowly, your user will think the app is broken and delete it.

Network Virtualization takes functional testing to the next level. It will simulate real world conditions for any network on earth so you can test the functions of your mobile application under the same set of real-world circumstances your users will face.

The best network virtualization tool, Experitest’s SeeTest Network Virtualization, takes it one step further. It will drill down to a user’s position to re-create a dynamic personal environment. You can test for the user changing positions as he rides through a tunnel, or enters and exits an elevator.

Even when a team performs adequate functional and performance mobile application testing, there is no guarantee that the same number of people will be using the application at all times. Concurrent usage is a big challenge for mobile testers as large masses of people can call the application server all at once. There are more smartphones in the world than desktops. Heck, there are more smartphones on earth than toothbrushes! Traffic is now an issue for the most ubiquitous communications device ever made. A normal traffic load can be using your app at any given moment, but for some reason, they all decide to use the same function at the same time. This creates load issues that both functional and performance testing don’t cover. A top of the line load testing tool, like SeeTest Load will re-create conditions for your mobile application to perform under the challenge of masses of concurrent users accessing your mobile application, or all of them accessing the same function at once. 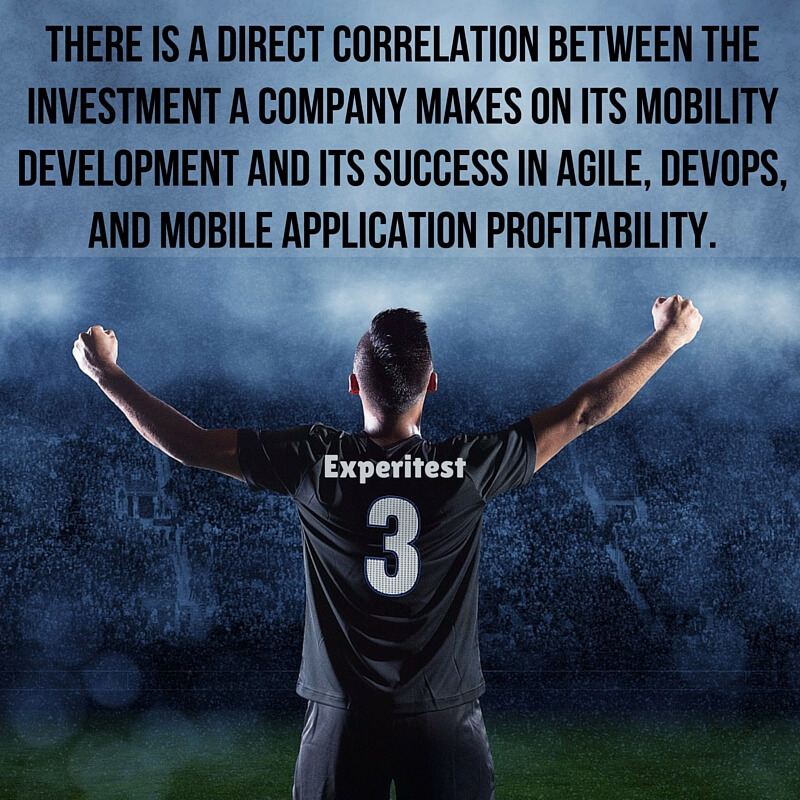 The move to DevOps and Agile revolves around one primary objective: shorter time to market for your mobile application without sacrificing test coverage in the process.

This significantly reduces the role of manual testing. To accomplish this you must have mobile test automation tools. There is also another tool that will ramp up your DevOps strategy: The cloud.

Cloud testing is the final piece of the puzzle. It takes test automation and parallel execution to the next level. You can set up a mobile device lab in your company, and hook up 50, 100, 300 devices to test all at once. Each device can have a popular combination of mobile device type, operating system, version, and local network to enable you to cover a massive area of test coverage in just one test execution.

This is parallel execution and mobile test automation in its finest form. Testers from different offices can be assigned different devices at different hours. The QA manager can organize a 24 hour non-stop mobile testing process. At the other end of the mobile device lab, all testers can use both functional testing, Network Virtualization Testing, and Load Testing tools to conduct a comprehensive testing plan on a huge amount of devices.

Connecting all of this to a Continuous Integration (CI) Platform like Jenkins, JIRA, or QC optimizes the entire DevOps process: You can release new versions of your mobile application faster while maintaining a massive test coverage in both functional and performance mobile testing. 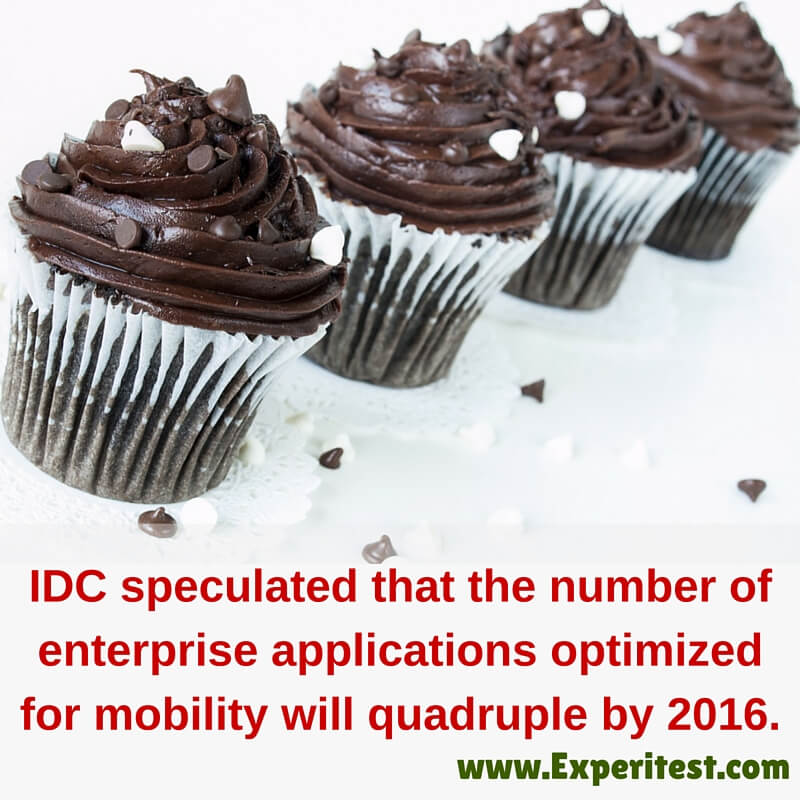 Mobile was adapted by the world faster than any technology ever developed. It was 30 years from the time electricity was publically available to the time 10% of the population was using it. It took 64 years before the telephone was used by 40% of the population. Smartphones accomplished this feat in less than a decade.

How fast will the internet of things penetrate the world? What about wearables? What about applications that track sensors and hardware implanted into your body, or the body of any living creature?

Smartphones, IoT, Big Data are all new technologies penetrating the world at a rate we have never seen before. Not only must mobile applications be released and re-released in a constant cycle of new versions, the organizations inside businesses themselves must be in a state of constant change to enable itself to keep up with everything.

A mobile testing tool must quickly adapt itself to test for applications running on smartwatches. It must move fast to test new features that the latest versions of Android and iOS come out with each year. It must enable apps reading data from a pacemaker inside someone’s heart with the greatest accuracy. It must be ready to expand its testing capabilities to include wearables, self-driving cars, and other new technologies we haven’t heard of that will become commonplace by the end of this decade.

SeeTestAutomation has rapidly enhanced its capabilities to test for wearables, fitness bands, new functionality on the latest devices, and mobile applications receiving and transmitting data from the array of sensors which make up the internet of things, enabling mobile testers to quickly test for any innovation they wish to incorporate into their mobile application.