If you are a mobile developer, you already know what Appium is. Appium makes the job of application testing easy and effective. You also might know how hard it is to test your application when you have to deal with a broad range of devices and technologies. There is nothing more desirable than to be able to write a test only once and run it on every type of device and operating system. Fortunately, Appium allows you to do just that!

The beauty of Appium is that you can write your test codes in any language like C#, Java, and Ruby on Rails. This is without having to make any changes to the application during testing. In addition, it is an open source tool. Appium works perfectly across a wide range of devices, operating systems, and emulators. This makes it the natural choice for mobile test automation.

Appium is a great tool, but many testers with a humble coding background find working with Appium intimidating. In the presence of a variety of Appium based open source frameworks, however, this is becoming less of an issue. In fact, working with Appium has never been easier. If you know how to use open source tools like Appium Studio or Katalon Studio. These tools are there to help you simplify the way you build Appium tests.

We have dug a little deeper into this matter to analyze four of the most reliable mobile testing automation tools that currently support Appium. They include Katalon, Appium Studio, Oxygen, and TestProject. In the following sections, we are going to look into the key features of each of these four tools. We will also provide you with helpful insights you can use to make a well-informed decision.

Katalon is a ready-to-use mobile automation framework that supports cross-platform and cross-device mobile and web app testing automation. Built on top of Selenium and Appium, the tool is publicly available to perform automation testing on web and mobile. Katalon Studio supports web testing, API testing, as well as mobile testing. The tool is ahead of the pack in many aspects of test automation. For example, it supports data-driven testing to help testers define data sets and execute test scripts fasters and more easily. It utilizes Selenium’s Desired Capabilities to work with various browser capabilities that are aligned with user preferences like handling browser cookies and SSL security popup, etc. It uses Spy Mobile for object identification and locators to define app element for test automation.

All in all, the tool is there to make test automation easier and accessible to everyone.

Appium Studio is one of the few tools that make mobile testing automation truly convenient. It comes with a user interface and an execution engine that includes all the tools necessary to simplify the process. As such, Appium Studio is not a hardware-specific framework and can perform testing on iOS devices using a Windows machine. It even allows testing outside of your app to achieve high coverage rates. If you have an existing Appium test going, Appium Studio allows you to run the same test with no need for modification. Appium Studio provides the flexibility to generate tests effortlessly. It features advanced object identification methods such as Object Spy and XPath to write robust and maintainable test scripts rapidly.

Reducing the feedback cycle is another benefit the tool provides. This comes in the form of detailed test reports that include screenshots and videos. If you’re using IntelliJ or Eclipse and want to execute end-to-end mobile test automation, you can install Appium Studio plugins and perform the tests directly from within your IDE.

Appium Studio supports remote environments, making it possible to distribute your team globally. Installation or upgrading is effortless and performed in a few steps only. You can cut the effort and cost involved in developing, running, analyzing, and debugging Appium based mobile tests, improving release cycle and app quality. Finally, Appium Studio comes with a guaranteed OS version support and enables large-scale parallel execution using the SeeTest Digital Assurance Lab.

Oxygen can also be integrated with continuous integration systems through its console application. The tool has built-in support for web services, databases, web apps, hybrid apps, and native apps. The language Oxygen uses to write tests is primarily JavaScript but the tool provides a number of modules for automation purposes, such as the mob module which is used to automate mobile application interactions.

TestProject is yet another tool that simplifies and enhances the use of Selenium and Appium in test automation. The tool is meant for everyone as it comes without a complex setup and works across a variety of supported browsers and mobile devices. TestProject’s SDK supports both web and mobile applications on any platform. Creating automated tests for mobile and web is as easy as a single click with the help of TestProject’s in-browser recorder.

Integrating with your existing CI flows is also possible through TestProject’s REST-API. TestProject comes with an easy installation process and makes the best tools and SDKs available while minimizing maintenance efforts. Because the framework is open source, it is collaborative at its core and is driven by passionate developers. Finally, TestProject comes with a cloud-based dashboard that provides detailed logs and insights into your projects and tests. These actionable reports make it possible to quickly identify failed steps and troubleshoot, saving valuable time and resources.

Which Tool Is Good For Me? 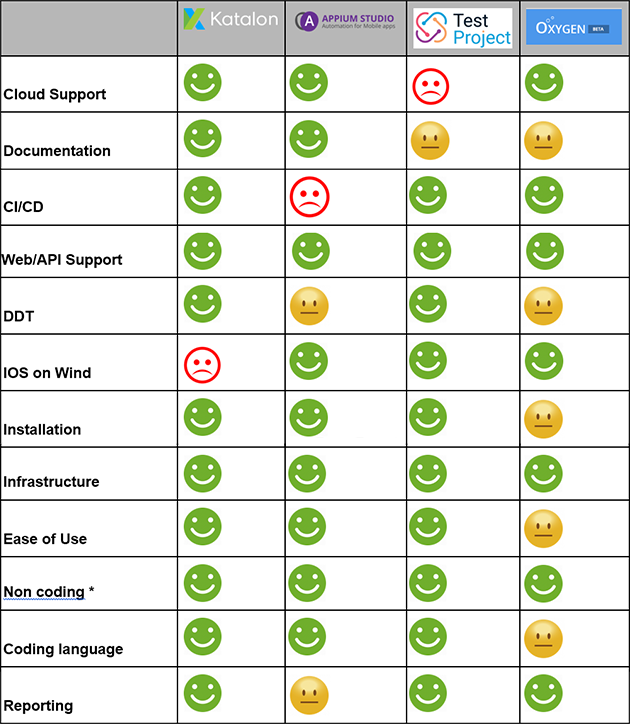 From the above comparison, it appears that Katalon, Appium Studio, and TestProject compete neck and neck as far as automation features are concerned. Oxygen, on the other hand, is lagging behind in some areas. In a nutshell, users are better off if they choose either of the three tools to automate their mobile application testing. However, if you are still unsure or indecisive about your choice. We recommend you consider Appium Studio as your best bet. Appium Studio is reliable, comprehensive, and works like a charm when it comes to mobile testing automation.

For more about Appium and open source software check out our webinar on building a continuous testing pipeline.